I’m back in Hamburg and get the chance to return a favour by taking the person out who introduced me to the Imperial Theater here at my last visit. There is no denying my home city is an anglophile place – more Brits became citizens of the Free und Hanseatic City of Hamburg since the Brexit referendum than in any other city in Germany.

Because most theatres in Hamburg employ whole ensembles rather than casts for individual productions actors often have the summer off and instead hosting guest plays is very popular. The temperature this week has broken all records so we will cool off with the musical Titanic at the Hamburger Staatsoper, its here for two weeks on its last touring stop (I referred to my last visit at Hamburg’s opera house recently). We will hear it in its original English language with German translations displayed above the stage. I followed the reviews of the show’s UK tour over the last couple of weeks and have not heard a single bad word. The finale in maritime Hamburg seems almost logical – Hanseatic citizens get up at 4pm by the thousands every time a cruise ship reaches the city’s harbour (ranking third to Rotterdam and Antwerp in Europe) just to wave it a welcome. Hamburg, the gate to the world.

The Hamburg State Opera or rather Hamburgische StaatsoperWhile following the feedback back in Britain I wondered what I would expect – the tragic outcome hardly bears a surprise. A tragedy therefore? Obviously, and this is an opera house after all. When I saw Criss Angel in Las Vegas the very same hotel hosted a Titanic exhibition and a week later the hotel’s name I stayed in in Berlin was Titanic. During Leo-mania in the late nighties the Titanic exhibition was extended in Hamburg at least twice and the city considered buying it to give it a permanent home. In the Booker Prize winning novel The Orphan Master’s Son by Adam Johnson North Koreans find a DVD with James Cameron’s film on it and watch it secretly – not knowing a word of English what confuses them most is why anyone would make a film about a tragedy, with no happy ending, no message on how authorities were right in the end, even when it takes sacrifices. The Titanic myths never seem to go away.

We are taking our seats in the centre front row and joke with other audience members that everyone is here just to see the iceberg, it is that warm outside. The stage is framed by big bolted metal plates and so is the background, further back are decks, railings, ropes and dry ice, only illuminated by a cold light – here the Titanic is being introduced not as a glamorous cruise liner but as a frightening menace of unforgiving heavy construction with an atmosphere dominated by metal which can crush everyone at any minute, a swimming metropolis.

The music starts and I am immediately swept away – the sound is so bombastic that I feel like I am part of the score. We are not in a classic opera house with statues of Wagner’s characters in every corner but a building from the 1950s; I have never in my single life experienced sound like this before, not even when I heard the Carmina Burana sung by a super choir of over thousand voices in the Royal Albert Hall and was moved to tears.

It is cold on the TitanicWe are introduced to the interior, the crew and the passengers and it is their faces, their life story and hopes which make the stage shine bright and warm so much so that I don’t notice the surrounding bolts anymore, I see dreams and golden futures and now I want to get onboard this floating city and start a new life in America. Before my own trip to New York last year (by plane respectively) I revisited Hamburg’s excellent migration museum in BallinStadt where the migration from all over Europe over the Atlantic was coordinated.

The life stories told today are all based on actual passengers and one wishes them all a farewell, the hard working stokes, maids and butlers and also the self-assured engineers and captain. It is the latter who insist on increasing the speed, ignoring warnings coming in by the new technology of telegraph – and then suddenly the iceberg hits: A shock wave of white light and threatening noise in our faces.

The unorganised, unfair and depressingly inefficient distribution of life boats soon become the real drama; it almost seems that the only person really trying to save the situation, the ship and the 2000 people onboard is the telegrapher who cannot reach anyone – while above his head the captain and engineers play an irrelevant blame game, wasting energy which is now urgently needed elsewhere.

By now the life vests are the stage’s haunting leitmotiv and Ai Weiwei’s installations spring to my mind and the daily news of the Mediterranean.

We all leave with a big knot in our throats. Something must have made everyone seated in the opera house hope that the end of the story would have been adjusted, twisted to honour at least the third-class passenger’s believe for a better life – but of course there can be no other ending and that is a bitter, necessary reminder of what is happening in today’s world. I feel embarrassed, caught out. Bravo! 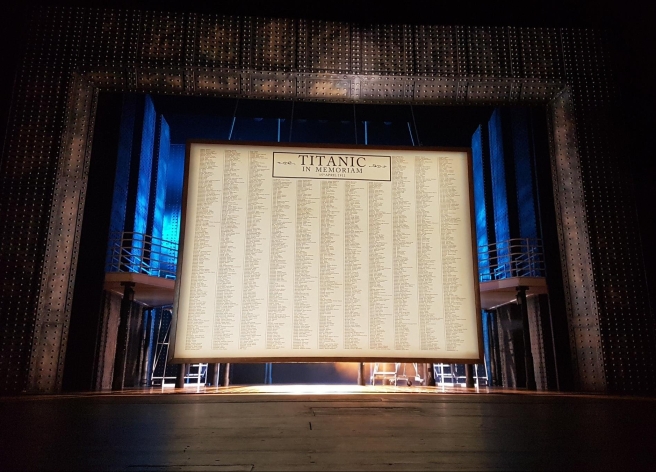 Titanic  – The Musical by Maury Yeston, book by Peter Stone

Titanic The Musical continues its tour in 2019.

Published by Sadie takes the Stage

I am a London-based stageblogger with roots in Hamburg: While discovering the world I share what inspires me on all kind of stages – contact me if you have an idea of what to review next via sadietakesthestage@hotmail.com View all posts by Sadie takes the Stage

One thought on “Titanic The Musical in Hamburg’s opera house”

This site uses Akismet to reduce spam. Learn how your comment data is processed.

I am a London-based stageblogger: While discovering the world I share what inspires me on all kind of stages – have an idea what to review next? Contact me via sadietakesthestage@hotmail.com

My ⭐ ⭐ ⭐ ⭐ review of How To Live A Jellicle Life is out - thank you @linuskarp @awkwardprods for a lovely email @phoenixartsclub :
Good old West End stroll!
Happy Shakespeare Sunday - look what I found tidying up!
Happy birthday to the professor - and greetings to all fellow members of the @tolksoc with this picture of the JR Tolkien spotted last month in the harbour of Hamburg, Germany!
So glad my pressie to the European continent this summer was a success - thank you again @vendulalondon for the reliable delivery to Germany ! The #Macbeth bag is even more beautiful in real life, now I can admire it!
Father Christmas got me a voucher to see Harry Potter @hptheaterde (yes, that's the German version of @cursedchildldn ) which I will happily use during my next trip in the most beautiful Hanseatic city of the world - but today was the time for a stroll in the winter sun once temperatures dropped from -11 to warm -5 degree Celsius.
My **** review of Hamburg's reimagined Wicked is out: https://sadietakesthestage.com/2021/12/23/oh-my-oz-wicked-in-hamburg/
Don't think there are any bad seats @charingcrossthr - especially for solo visitors. Press night for the ⭐⭐⭐⭐ play "Vanya and Sonia and Masha and Spike" has now already been a couple of Mondays ago but you still have until mid-January to see it (do if you like Chekhov). Always a pleasure reviewing for the lovely @londonpubtheatres bunch!
Absolutely love the Theatre Memory Book I got from St Nikolaus this morning - because going out was often this year (and still) not an option, I can't wait to get started in 2022!